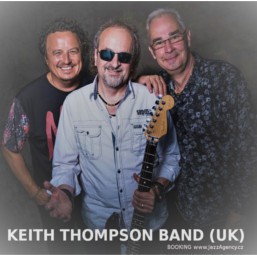 British Blues Rock musician Keith Thompson, solo and with his band have been consistently performing in mainland Europe now for 20+ years, where he is well known to the large blues following as an exciting live performer. This year Keith completed his 8th Blues/Rock album, “Catch the Fire” which features as guests, Buddy Whittington (John Mayall etc.) and rising star, Laurence Jones. Keith and the band have subsequently toured again in Switzerland, Austria, Germany, Poland, USA & UK. They also appeared at several major festivals in Croatia including Baska International Guitar Festival, Umag and Kastav Blues Festivals. Also at Slovenia at the prestigious “Postonja Blues Festival” with “Ten Years After” and “Paul Lamb and the Kingsnakes”, Suwalki and Krosno Festivals in Poland alongside, Jeremy Spencer (Fleetwood Mac), Clarksdale Blues Festival, USA, Colne R&B festival in Lancashire, Swanage, Banbury Upton and Gloucester Blues Festivals in the UK. Keith has added his skills on stage or in recordings to projects by Spooky Tooth, Mike D’Abo, Steve Winwood, Ruby Turner, Larry Burton, Dave Markee and Henry Spinetti (Eric Clapton Band and Tina Turner) Greg Ridley of Humble Pie, The Groundhogs, Robbie Blunt, (Robert Plant) Luther Grosvenor of Mott The Hoople, Gino Washington, and many others. See what the press say: Reviews

Keith first started playing guitar aged 5! By the time he was 8 he won first prize at a Butlin’s holiday camp talent show playing Beatle tunes. The British blues boom of the 60's produced great guitarists like Eric Clapton, Jeff Beck, Jimmy Page and Peter Green. It was this music alongside popular songwriters like The Beatles, The Stones, and John Martyn and later the British Blues/Rock pioneers Free, Led Zeppelin etc. that Keith grew up listening to. He was 14 when he first started working the pubs and clubs playing mostly covers of these great artists. Soaking in the experience and further influences like, Rory Gallagher & Gary Moore, Keith started to develop his own material. His band, “Poacher Brown” while still teenagers in pre punk 70’s toured Germany, playing 6 nights a week, playing 5, 45 minute sets a night! That was Keith’s first full-time professional stint and it changed his life. This was the same Hamburg culture on which the Beatles cut their musical teeth. He came back in 1978 and joined forces with another local guitarist Mick (Wurzel) Burston (later of Motorhead). This band, “Bunter” started receiving glowing reviews in the national music press. Keith carried on writing and recording., enjoying stints on stage with gospel rockers, "Third Day" and "Margaret Becker Band" and heavy metal band, "Lyadrive" along the way. Working as a session guitarist he has added his skills to various projects including, work on the soundtrack for the best selling computer games., "Grand Prix 2" and "Over The Hedge". As a songwriter and music composer he has also gained recognition. A lot of incidental music for television programs and soundtrack projects have been produced and he has sold over 100,000 albums. A few years ago he was voted “Songwriter Of The Year” in Six Counties and this year one of his songs, "Preaching The Blues" was voted into third place in the "People's Voice" competition, being the only UK finalist in the International Songwriting Competition (Blues Catagory) out f over 16000 entries.