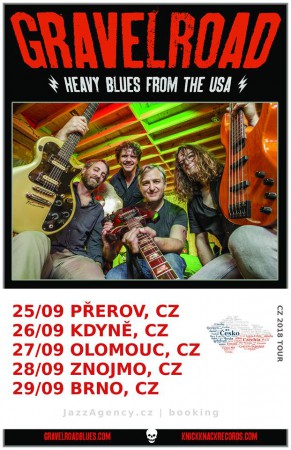 GravelRoad is a Seattle band that blends the trance of North Mississippi Hill Country blues with the fuzz and power of heavy rock and roll.  The band’s 6th full-length studio album,  Capitol Hill Country Blues, will be available in the fall of 2016 on LP, CD, and cassette.  The band continues to bring its high energy shows to venues & festivals throughout the US and Europe in support of the new record and beyond.

GravelRoad’s mix of driving rhythms and heavy guitar sounds range from minute-long fits of angst to slow and methodical psychedelic tracks.  “Rabbit Run” and “Rather Be Lonely” give followers a sense of the familiar from the veteran band. Conversely the band pushes boundaries  on Capitol Hill Country Blues songs such as the Krautrock-inspired instrumental “Green Lungs” and the album’s finale “I Feel High”, a stunningly beautiful solo acoustic track.

“It’s a little like what John Lee Hooker may have sounded like in Black Sabbath.  And who wouldn’t want to hear that?”